Everyone slept right up until the wake-up music this morning – they were all tired after yesterday’s fun in the pool! But once awake, they had no problems running round in the garden during the morning games, and then came back in for breakfast to refuel.

Then to English classes again. The Horses have started learning about endangered species, and during the break, Lucía P and Laura told me about the Tasmanian tiger – they knew a lot more than I did! Carlota has become more and more communicative every  day, and today really showed what an improvement she has made. The class played a variation on the game Sleeping Village, with a saber-toothed tiger as the killer and a mammoth looking for clues.

The Goats were learning about different forms of transport, and made models from various materials – they’re a very creative group! Alfonso was working really hard and was the first to finish every activity or exercise. Ierin learned all new vocabulary incredibly quickly, and was keen to answer questions and read out loud whenever she could.

The Ponies continued to learn about recycling, and made towers from recyclable materials. Nico in particular was a shining star in today’s class, showing more confidence every day when speaking English.

After lunch (arroz cubano, which everyone went mad for!), we went on to the afternoon activities – clay modelling, and archery. In the first group using clay, Nico really amazed everyone with the cup he made. In the first archery group, Miguel was the first to hit the balloon in the centre of the target – bullseye!

Then the groups switched. Macarena and César both hit the centre of the target in archery, with Illana and Víctor managing to pop the balloon (Enol and Alicia were sending their arrows flying way over the target!), and in the clay modelling, Dani C was creative and made a burrito, and Yaiza made a four-leaf clover.

Dinner time today was noisy, possibly the noisiest day yet, but as I looked around the room, I felt incredibly proud of all of the children, and how much confidence they have gained in just a few days. Illana and Víctor were laughing uncontrollably at Juan and Dani C pulling faces, and their laughter was contagious. Paula, Laura and Yaiza were speaking more than I’ve seen all camp. Jorge was giggling at César’s jokes. Girls were sitting with boys, older kids with younger ones – they’ve formed some amazing friendships in such a short time, and I can’t wait to see how this will develop over the next week and a half. 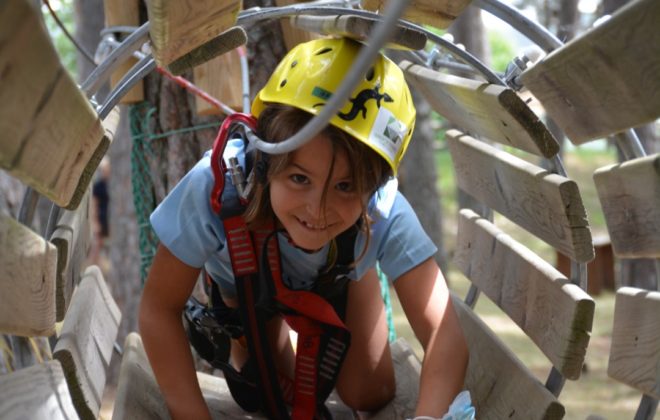