The campers all seemed to have a lot of energy this morning so they went for a run around the field before breakfast. At breakfast time, we changed the table arrangement in the dining room. Up until now, we’ve had all the tables joined together, and the campers free to choose where they wanted to sit (which of course meant always with the same people!). Today we separated the tables and told the children where to sit, to encourage them to sit with new people. At lunch time, when we asked them if they wanted to go back to free choice tomorrow, they said they didn’t! They’ve enjoyed sitting with new people and getting to know others.

In class today, the Horses continued to learn about fashion. They conducted a class survey, asking each other about their shopping habits, and designed comedy T-shirts. The Goats continued to learn about water, and various related vocabulary. They also did some activities with the structure of “Would you rather…” which led to an interesting dinner conversation with Illana!

The Ponies spoke more about the body, and about various illnesses and ailments we can suffer. They had a lot of fun in a “pin the tail on the donkey” style game, where one member of each team was blindfolded, and their teammates had to guide them to stick an arrow onto the correct body part. Sofía finished book exercises first every time, and very well. Jorge B and Rafa each won a game of Simon Says, with their quick reactions and sharp minds!

After lunch, the students worked in four groups and made cakes. Again, they were in mixed groups, with students of other ages, and they worked really well together. Every group worked as a team, sharing responsibility for the baking.

After that, they went outside and played sports day inspired games on the field. They had a great time working together to earn points for their teams!

Following the snack, the campers went back to the farm. Those who had been with the animals yesterday visited the vegetable patch today, and vice versa.

As usual, dinner was followed by a night game – a new game, which nobody had played before, but everyone had a lot of fun learning! The campers also got their backpacks ready for tomorrow’s trip to the swimming pool. Fingers crossed the water will be a little warmer than last week! 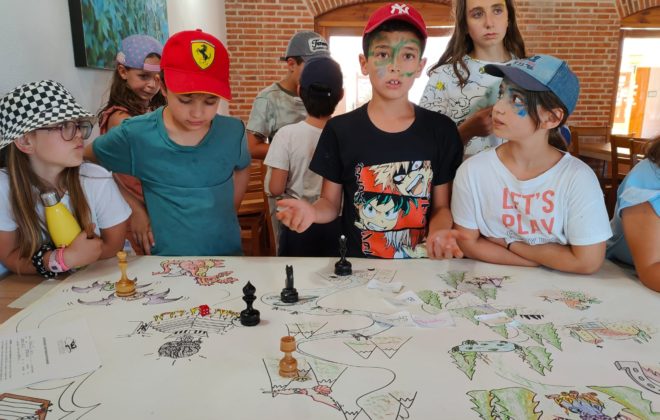 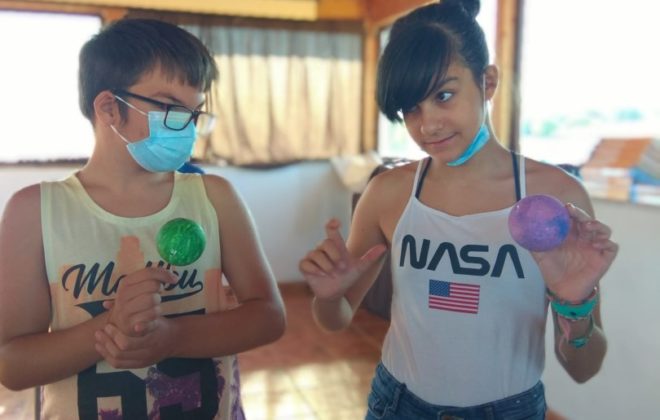 Day 8: Looking to the future